Teresa Mears -- a friend and an excellent journalist -- is among the many newspaper people who have lost their jobs. She has turned her creative efforts into a series of frugal blogs. Here's the release:

In the current coupon-clipping climate, everyone is asking “how can we save money and still enjoy our lives?” Now, a collection of new local blogs is providing some answers to that question every day.

The new blogs are edited and published by Teresa Mears, a veteran South Florida journalist – downsized from her newspaper job last year – who has lived in Florida for nearly three decades.

“Everyone — including me—is looking for deals right now,” says Mears, who left The Miami Herald in July after 30 years of writing and editing for newspapers. “And they’re out there. I’m just trying to make it easy for people to find them. Plus, South Florida has so many wonderful free activities – but they’re not always easy to find.”

Over the past several weeks, thrifty readers of South Florida’s “On the Cheap” blogs have learned about deals as diverse as discounted tickets to the Miami International Film Festival, free kids’ meals on Friday nights in Hollywood, free previews of Palm Beach Opera performances and “date night” deals to the Waterfront Playhouse in Key West, plus national food discounts and freebies. That’s in addition to dozens of opportunities to experience music, art, kids’ activities and attractions for free.

The South Florida “On the Cheap” blogs are part of a rapidly growing network of independently owned and operated “Cities on the Cheap” http://www.citiesonthecheap.com websites in the United States and Canada.

Owned mostly by women, the network of blogs grew out of a series of conversation in an online writers’ network. Each editor owns his or her own blog, and the entrepreneurial journalists are working in collaboration. Most, like Mears, had never created a web site before, but nearly all the writers built their own sites. The sites are supported by advertising.

The Cities on the Cheap network is celebrating its official launch Tuesday, March 10, with contests and giveaways on some sites. The South Florida sites will be asking their readers for tips on South Florida deals and will be giving away books that mention money by South Florida writers as diverse as Dave Barry, Frugal Duchess Sharon Harvey Rosenberg and Suze Orman, plus a few Webkinz.

In Florida, On the Cheap blogs are operating in Gainesville, Sarasota and Tampa Bay, with launches expected soon in Orlando and the Florida Panhandle. In addition, Disney on the Cheap focuses on deals to the Disney theme parks.

Teresa Mears is a veteran South Florida journalist. In addition to working as an assistant features editor for The Miami Herald, she has worked for The Los Angeles Times, The St. Petersburg Times, The Gleaner in Henderson, Ky., and The Portland (Tenn.) Leader. As a freelance writer, she contributed to The Boston Globe, The New York Times, Miami Metro, WorldCity Business, Travel & Leisure and other publications. She now runs her own project management, editing and consulting business. She doesn’t clip coupons, but she does buy her clothes in thrift stores and is a devotee of the Publix “buy one, get one free” promotions.

Here's how to buy my book: 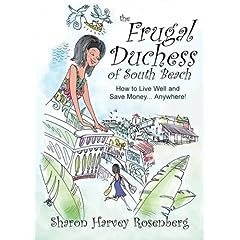 Posted by Frugal Duchess at 9:00 AM